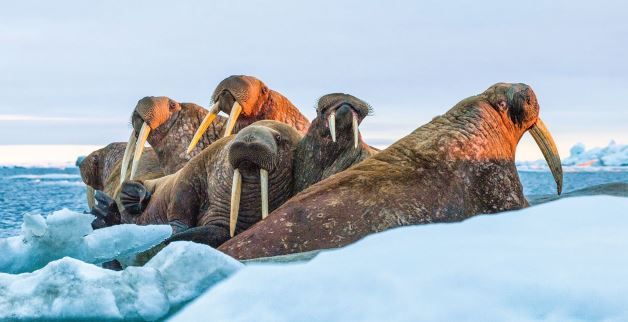 This fascinating exploration of the remote Siberian coastline promises rich culture and an astounding wealth of wildlife. Meet indigenous artists known for their intricate walrus ivory carvings, take in dramatic bird cliffs teeming with puffins and guillemots, then forge farther north, well above the Arctic Circle to Wrangel Island Reserve. Spend several days in this pristine landscape that’s home to the highest density of ancestral polar bear dens, the world’s largest population of Pacific walrus, and an astonishing variety of plant life. And before this expedition comes to an end witness one more site few get to see—an ancient, mysterious display of whale bones and skulls erected on Yttygran Island.

Once a camp for railway construction workers, Anchorage is now a cosmo-politan city with much to offer in culture and history. See the arts and crafts, weapons and costumes of the many Indian tribes who have long resided here displayed in the Historical and Fine Arts Museum,and take an excursion to Ship Creek, site of the original Tent City. Anchorage is the largest city in Alaska and the gateway to many of thewonders of the Last Frontier.

Offer subject to availability and change without notice. Some restrictions may apply.

Click on the buttons below to request a quote on this deal or contact us directly with further questions or comments.

Request A Quote Send To A Friend Have A Question? Contact Us